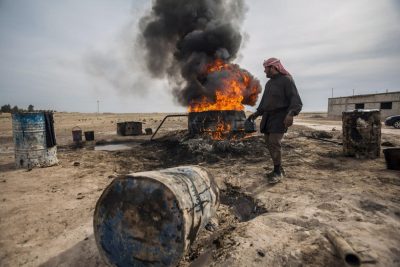 While President Trump lashes out at rioting and looting in Portland and Kenosha, half way around the world, the USA and Turkey are plundering and looting Syria on a vastly greater scale with impunity and little publicity.

Turkey has been plundering the Syrian infrastructure for years.  Beginning in late 2012 and continuing through 2013 some 300 industrial factories were dismantled and taken to Turkey from Aleppo, the industrial capital of Syria. “Machinery and goods were loaded on trucks and carried off to Turkey through the Cilvegozu and Ceylanpinar crossings. Unfortunately, ‘plundering’ and ‘terror’ have become permanent parts of the Syrian lexicon when explaining their saga.”

In October 2019 Turkish forces invaded Syria and now occupy a strip of land in north east Syria. The area is controlled by the Turkish military and pro Turkish militia forces misnamed the “Syrian National Army”. Turkish President Erdogan dubbed the invasion “Peace Spring” and said the goal was to create a “safe zone”. The reality was that 200 thousand Syrians fled the invasion and over 100 thousand have been permanently displaced from their homes, farms, workplaces and livelihoods.

Turkey now controls the border city of Ras al-Ain and the nearby Allouk water treatment and pumping station.  This is the water station supplying safe water to the city Hasaka and entire region. The Turkish forces are using water as a weapon of war, shutting down the station to pressure the population to be compliant.  For over two weeks in August, with daily temperatures of 100 F,  there was no running water for nearly one million people.

With no tap water, civilians were forced to queue up for hours to receive small amounts from water trucks. Unable to buy the water, other civilians took their chances by drinking water from unsafe wells. According to Judy Jacoub, a Syrian journalist originally from Hasaka,

“The residents of Hasaka and its countryside have been pushed to rely on unsafe water sources ….Many residents have been suffering from the spread of fungi, germs and dirt in their hair and bodies as a result of using well water that is not suitable for drinking and personal hygiene. The people of Hasaka remain vulnerable to diseases and epidemics because of the high temperatures and spread of infectious diseases. If the situation is not controlled as soon as possible, the spread of Corona virus will undoubtedly be devastating.“

A hospital medical director says many people are getting sick from the contaminated water.

Judy Jacoub explains what has happened most recently:

“After Syrian and international efforts exerted pressure on the Turkish regime, 17 wells and three pumps were started . The main reservoirs were filled and pumping was started toward the city neighborhoods.  However, despite the Turkish militia’s resumption of pumping water again, there is great fear among the citizens.”

The USA also has occupying troops and proxy / puppet military force in north east Syria. The proxy army is misnamed the “Syrian Democratic Forces” (SDF). How they got that name is revealing. They took on this name as they came under the funding and control of the US military. As documented here, US Army General Ray Thomas told their leadership, “You have got to change your brand. What do you want to call yourselves besides the YPG?’  Then, he explained what happened: “With about a day’s notice they declared that they are the Syrian Democratic Forces. I thought it was a stroke of brilliance to put democracy in there somewhere.”

There are numerous parties and trends within the Syrian Kurdish community. The US has been funding and promoting the secessionist element, pushing  them to ally with Turkish backed  jihadists against the Damascus government.  The violation of Syrian sovereignty is extreme and grotesque.

Prior to the war, Syria was self-sufficient in oil and had enough to export and earn some foreign revenues. The primary oil sources are in eastern Syria, where the US troops and proxy forces have established bases. It is desert terrain with little population.

To finance their proxy army, the US has seized control of the major Syrian oil pumping wells. It is likely that President Trump thinks this is brilliant bold move – financing the invasion of Syria with Syrian oil.

In November 2019 President Trump said, “We’re keeping the oil… The oil is secure. We left troops behind only for the oil.”  Recently, it was revealed that a “Little known US firm secures deal for Syrian oil“. Delta Crescent Energy will manage and escalate the theft of Syrian oil.

Help us tell more of the stories that matter

What would Americans think if another country invaded the US via Mexico, set up bases in Texas, sponsored a secessionist militia, then seized Texas oil wells to finance it?  That is comparable to what the US is doing in Syria.

In addition to stealing Syria’s oil, the US is trying to prevent Syria from developing alternate sources. The “Caesar sanctions” on Syria threatens to punish any individual, company or country that invests or assists Syria to rebuild their war damaged country and especially in the oil and gas sector.

The US establishment seems to be doing everything it can to undermine the Syrian economy and damage the Syrian currency. Due to pressure on Lebanese banks, plus the Caesar sanctions, the Syrian pound has plummeted in value from 650 to 2150 to the US dollar in the past 10 months.

North east Syria is the breadbasket of the country with the richest wheat and grain fields. There are reports of US pressuring farmers to not sell their wheat crops to the Syrian government. One year ago, Nicholas Heras of the influential Center for New American Security argued “Assad needs access to cereal crops in northeast Syria to prevent a bread crisis in the areas of western Syria that he controls….Wheat is a weapon of great power in this next phase of the Syrian conflict.”   Now, it appears the US is following this strategy. Four months ago, in May 2020,  Syrian journalist Stephen Sahiounie reported, “Apache helicopters of the US occupation forces flew low Sunday morning, according to residents of the Adla village, in the Shaddadi countryside, south of Hasaka, as they dropped ‘thermal balloons’, an incendiary weapon, causing the wheat fields to explode into flames while the hot dry winds fanned the raging fire.

After delivering their fiery pay-load, the helicopters flew close to homes in an aggressive manner, which caused residents and especially small children to fear for their lives.  The military maneuver was delivering a clear message: don’t sell your wheat to the Syrian government.”

To better loot the oil and plunder the Syria economy, in the past weeks the US is sending more heavy equipment and military hardware through the Kurdish region of Iraq.

In the south of Syria, the US has another base and occupation zone at the strategic Al Tanf border crossing. This is at the intersection of the borders of Syria, Iraq and Jordan. This is also the border crossing for the highway from Baghdad to Damascus. The US controls this border area to prevent Syrian reconstruction projects from Iraq or Iran. When Syrian troops have tried to get near there, they have been attacked on their own soil.

Meanwhile, international funds donated for “Syrian relief” are disproportionally sent to support and assist the last strong-hold of Al Qaeda terrorists in Idlib on the north west border with Turkey.  The US and its partners evidently want to sustain the armed opposition and prevent the Syrian government from reclaiming their territory.

The USA and Turkey have shown how easy it is to violate international law. The occupation of Syrian land and attacks on its sovereignty are being done in broad daylight. But this is not just a legal issue. Stopping the supply of safe drinking water and burning wheat fields to create more hunger violate the most basic tenets of decency and morality.

With supreme hypocrisy, the US foreign policy establishment often complains about the decline in the “rule of law”. In actuality, there is no greater violator than the US itself.

In his speech to the UN Security Council,  Syrian Ambassador Ja’afari decried this situation saying “international law has become like the gentle lamb whose care is entrusted to a herd of wolves.”

Note to readers: please click the share buttons above or below. Forward this article to your email lists. Crosspost on your blog site, internet forums. etc.

Rick Sterling is a journalist based in the San Francisco Bay Area of California. He can be contacted at [email protected]

Featured image is from Mideast Discourse

We hate SPAM and promise to keep your email address safe

Demonstrations against “New Normal” in Berlin: The Storming of the Reichstag Building on 29 August, 2020
Ex-head of world athletics Diack found guilty of corruption – Reuters Africa